‘The Stone Roses: Made of Stone’ Review 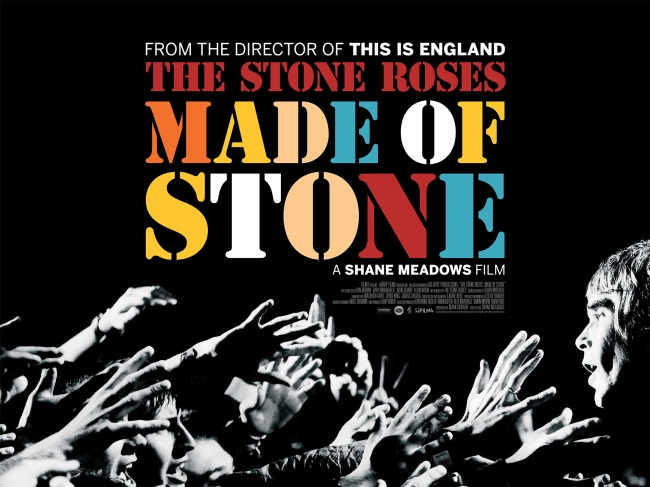 Does acclaimed director Shane Meadow’s self-confessed ‘love letter’ to The Stone Roses break from the traditional music documentary model work for the better or fail to live up to the band’s hype?

Continuing in Manchester’s rich heritage for producing seminal music groups, such as Joy Division and The Smiths, The Stone Roses not only epitomised early 90’s ‘Madchester’ but also almost overnight became the voice of a generation. With an anti-establishment attitude born out of 70’s Punk coupled with a musical style more reminiscent of 60’s Psychedelic rock The Stone Roses went from Manchester’s best kept secret to national heroes with their ground-breaking debut album. Peaking in 1990 with a landmark concert on Spike Island The Stone Roses and lead singer Ian Brown literally held the world in their hands, set to conquer the musical landscape but an impending court case was to derail their dreams.

Following a contractual dispute with their old management the band faced a two year recording embargo while their legal troubles rumbled on. With no output the band’s popularity and momentum waned leading to a predictably lacklustre sophomore in ‘The Second Coming’ almost 5 years after their debut. As the band’s music faltered the relationships amongst the members began to deteriorate leading to the Roses’ end on acrimonious terms in 1996. Rumours of a reunion were constantly squashed by former members, with guitarist John Squire going as far as to say he would not “desecrate The Stone Roses’ grave” yet in 2011 with virtually no prior indications The Stone Roses announced their return, this truly was the second coming and the resurrection all at once.

This is where Shane Meadows picks up ‘Made of Stone’, following the band from their returning press conference up to their concert at Heaton Park for 70,000 fans.  With unprecedented access to the band and many questions remaining regarding The Roses volatile break up, what drove them apart and why they reformed after denying calls for it before; ‘Made of Stone’ seems like the perfect place for the band to set the record straight. This however is not the case as the film completely skirts round any potentially continuous issues, with much of the blame falling on the director.

Early into the film it becomes apparent of how big a fan Meadows is as we see a middle aged man reduced to child-like awe at finally seeing his heroes play live after a 20 year wait. His enthusiasm is admirable; perfectly encapsulating the deep rooted connection the band holds with its fans but also compromises his ability to make an objective film about The Stone Roses. With the band banning any one-on-one interviews and Meadow’s lack of willing to dig beneath the surface leaves an extremely hollow film.

Meadow’s fear of rocking the boat or upsetting the band is encapsulated in an incident where drummer Reni storms off stage in Amsterdam before the end of their set. Tensions rise as Reni is seen leaving the arena, the band look shocked, the crowd begin to turn on them leaving Ian Brown to retort with “I’m not joking, the drummer has gone home. The drummer’s a c**t”. With the band’s future potentially hanging in the balance again the film cuts to Meadows who isn’t sure what’s happened but is going to give the band their space while they resolve any issues. That’s it, no explanation, no mention of the incident again

The best aspects of the film and the nearest the audience gets to learn anything new is from archive footage; ranging from Ian Brown at mod scooter rallies in the late 70’s to early performance footage as well as the band just larking about in the recording studio. A notable highlight is an early interview with Ian Brown and John Squire who do their best to give the interviewer a particularly difficult time which proves to be pretty hilarious, reminiscent of the Sex Pistols famously on Bill Grundy.

With the band themselves not doing much of the talking it’s left to the fans to explain how a musical group can have such profound impact on their lives. A large part of the film centres on The Stone Roses secret warm up gig in Warrington- the first since their come back and only 1000 tickets available. The amazing draw of the band has is shown in its full glory here as grown men abandon work and sense in order to get to Warrington in the hope of getting a ticket. Few musical acts could drive a man to offer his car for a ticket to see them; The Stone Roses are one of them.

It was after witnessing the pandemonium at Warrington that Shane Meadows decided he had a film on his hands but content is sparse once you look beyond extended footage of comeback concerts in 2012, climaxing at Heaton Park with a spell binding rendition of ‘Fool’s Gold’. These performances may be impressive and place the music as the star of the film but they soon become tedious, out living their welcome and papering over the lack of other content in the film.

Made of Stone often feels like an unfinished film, disjointed in its transitions and lacking in any new or insightful contribution without ever convincing as a feature film; yet if you are Stone Roses fan who has lived through the band’s peak years and remain a fan there is certainly enough nostalgic value to appeal. Furthermore the footage of the band in action with hits ‘I Wanna be Adored’ and ‘Waterfall’ is an excellent introduction to why their music and popularity are stronger than ever 24 years after they burst on to the scene.

Shane Meadow’s never professes to want to create a classic music documentary or “digging for dirt on people” but “ a celebration; it’s as much about the fans as it is about the band coming back” he told the Guardian, which is exactly how it pans out. Fans will revel in ‘Made of Stone’s’ nostalgic appeal and respect Meadow’s uncompromising stance on his favourite band but for those seeking answers or an in-depth look at who The Stone Roses are will be left wanting.

2 thoughts on “‘The Stone Roses: Made of Stone’ Review”