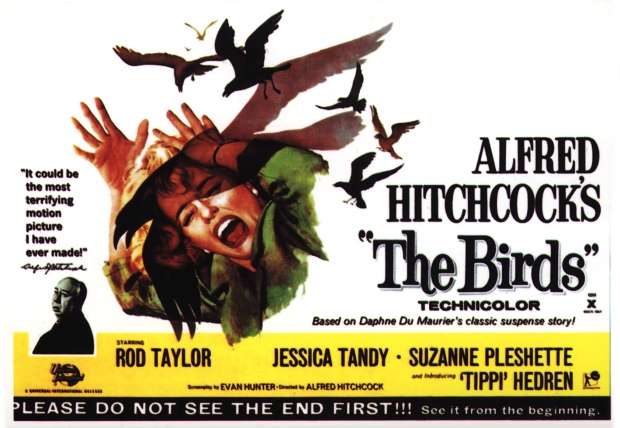 One of Alfred Hitchcock’s most revered and iconic films, ‘The Birds’ is far more than the horror film it is often remembered as, rather being an exploration of human relationships and a lesson in suspense than that of an attack of our normally feathered friends.

Before angry birds were being fired out of sling shots into flimsy wooden structures they were terrorising the sleepy port town of Bodega Bay. A chance encounter for glamorous socialite Melanie Daniels (Tippi Hedren) with dashing lawyer Mitch Brenner (Rod Taylor) at a pet store in San Francisco leads to her fascination with his charm, wit and above all nerve. She travels to his bay side house, two love birds in tow, to return the surprise encounter but soon after her arrival something begins to go awry with the quaint town. Random bird attacks become increasingly common and soon the town with Melanie and Mitch at its heart is under siege from an unexplainable backlash from the skies.

The film is unlikely to strike terror into too many people in this day and age due to the dated special effects, nevertheless it’s still easy to see how petrifying it would have been for audiences on its original release. The attacks may not be too impressive in terms of realism but they are unflinching in their intensity; as the dark menacing crows flood the screen it almost becomes hard to watch such is the frantic pace that the birds swam. Of course the effects aren’t the most significant part of ‘The Bird’s’ with the ‘Master of Suspense’ living up to his title.

While much of ‘The Birds’ is vintage Hitchcock in its approach, with splashes of ‘Psycho’s’ infamous shower scene and ‘Vertigo’s’ troubled relationships present, but there are some departures from the classic formulae. Hitchcock’s reputation for being the foremost thinking suspense director of his time, or ever, was built on his collaboration with Bernard Herrmann who crafted the some film’s greatest scores. Herrmann did work on ‘The Birds’ but not in his typical way as there was no traditional score for the film, a dramatic departure from the norm. Luckily the gamble pays dividends as key scenes are superbly shocking; without musical indicators for the audience the tension is self-manufactured making it much more palpable and real. Taking the thematic edge off of proceedings makes for a grittier approach than the slick presentation of Hitchcock’s other work without losing power. The brilliance of this approach is no more apparent in the film than the foreboding arrival of a crow on the climbing frame behind and unsuspecting Melanie, its Hitchcock at his most wonderful

Considering ‘The Birds’ is regarded as a horror classic it’s the sub plot and dark undercurrent themes that stand out. The first hour of the film is pure drama with little indication of the horrors to come, bar the playful pet shop scene. The characters are so well rounded by the time the real drama unfolds; Melanie’s lifestyle is questioned while Mitch’s relationships with an old flame and a protective mother are enthrallingly interwoven. Sadly these stories don’t ever quite get fully explored or sewn up as killer birds take priority for our heroes; still it’s incredibly refreshing to see characters in a horror film having a personality beyond cannon fodder that is so common in today’s usually lacklustre offerings

Something that often is forgotten, or overlooked, is Hitchcock’s wicked sense of humour and willing to explore the darker side of humanity that runs beneath his film’s main focuses. Mitch’s young sister wilfully questions why a man would shoot his wife as many as 6 times when surely only 2 bullets would suffice would be missed by many,  though its quickly skirted over the seemingly bizarre comment is a prime take on Hitchcock’s fascination with the perverse. When the birds begin their reign of terror the townspeople take refuge in the local diner leading to a memorable collection of characters deliberating not just the attacks but also the wider picture of life, religion and sciences on the situation. These fleeting conversations are much deeper than simply time fillers; they instead offer a unique insight into the wicked genius of Hitchcock as well as where his priorities are, preoccupations that appear in much of Hitchcock’s later work.

Re-watching ‘The Birds’ now it’s plain to see its influence on contemporary cinema; abnormal bird behaviour has become a hallmark of natural disaster films with recent efforts ‘Take Shelter’ and ‘Melancholia’ being prime examples. While it’s easy to spot the narrative similarities in recent films the most striking cinematic appeal is in the way Hitchcock can craft believable characters in an infamously shallow genre without compromising tension, suspense or scares. For anyone looking to see what Hitchcock was known for or what has made him probably the most important director ever ‘The Birds’ is a glowing endorsement of his legacy. Despite his techniques being forever imitated and adapted in cinema ‘The Birds’ still feels impressively unique. The dated special effects hamper how powerful it can be today but in terms of simply brilliant storytelling, character development and masterful tension its still flying high.

7.5/10- Another Master Class in Suspense