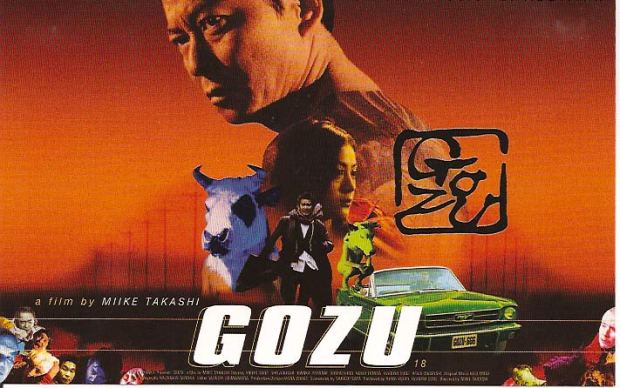 The purpose of reviewing classic films on here is to see whether certain films have stood the test of time or kept their original charm and impact, as well as to highlight tremendous pieces of cinema that people may have missed, be it the critically acclaimed or a lesser known cult classic. This review is very much highlighting the latter in the most possible extreme.

Scrolling aimlessly through the channels the other night in search of a film worth watching I stumbled upon the Japanese film Gozu on Film 4, promising a surreal and mystifying narrative on top of the fact it was part of the channel’s Fright-Fest series I decided to watch it with a keen sense of intrigue. Not being hugely knowledgeable of Japanese cinema beyond Godzilla and classic directors Yasujirō Ozu and Akira Kurosawa I entered the film with few preconceptions or ideas, little did I know I was about to witness some of the most shocking sequences that I have seen committed to cinema.

Director Takashi Miike pushes the boundaries of strange cinema to an unreachable edge, crafting something that might even make famed surrealist filmmaker David Lynch recoil on viewing. It’s a rarity that cinema can be so impressively significant and leave such a lasting impact on a person’s thinking far beyond its initial viewing, it’s unlikely many will actually enjoy the film but it’s undeniable that Gozu is dissimilar to anything else.

Miike’s film has a relatively routine narrative to lay the foundations for the crescendo of insanity to come. Yakuza, Japanese Mafia, members Minami and his revered superior Ozaki are sent on a mission by ‘Boss’ to the town of Nagoya, unbeknownst to Ozaki is that the trip is to have him assassinated. Ozaki’s increasingly erratic behaviour, which includes killing a small, harmless dog because he bizarrely thinks it murders Yakuza, has become too much to handle, meaning Miami, with a heavy heart, must ‘dispose’ of  him.

Upon reaching Nagoya things take a turn for the weird, very very weird. Ozaki disappears into thin air leaving Minami in a sweat but something more sinister is at work in the town with residents seemingly unhinged- people have the same conversations over and over again, one woman obsessively yearns over her lactating breasts and half of one man’s face pigment is gone. As Minami continues to search for his lost compatriot his descent into the surreal horror of Nagoya hastens, becoming increasingly disjointed and totally insane, far beyond the most disturbed imagination.

Gozu’s world of madness is surprisingly embedded in a very plane, real world that deviates minimally from that which we inhabit, a setting that embellishes the horrifying elements as it’s all so close to home. At its heart Gozu is quite a simple story about Minami and the homoerotic undertones of his relationship with his adopted ‘brother’ Ozaki, the straightforwardness of film’s premises is juxtaposed with the abstract and surreal way story is told. The film loosely follows the Greek mythology of Orpheus’ trip to hell to retrieve his wife Eurydice, plenty of parallels can be drawn with the tale but Miike impressively infuses it with a more expansive, perverse approach making something that’s nigh impossible to limit to a certain genre. 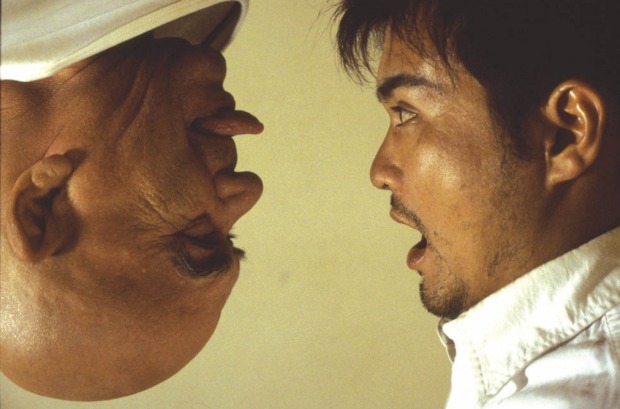 The film is sexually driven, dealing in almost every taboo conceivable, amounting to a dream film for Freud and a Freudian nightmare for everyone else. As the bizarreness sets in the film becomes deeply uncomfortable viewing but solace is found in protagonist Minami as he’s the only one rooted in normality amongst the oddballs of the hellish Nagoya. With Miike piling on the inexplicable thick and fast it’s reassuring to have a relatively normal character present, one who isn’t privy to what’s going on, without him rooted in reality the film would surely be little more than a series of alienating, nightmarish sequences.

One weakness is Miami’s acting at time, considering how strange everything, and everyone, is around Minami he’s worryingly naïve at times, so much so it’s taxing to see his continuously bewildered face come the fifth or sixth strange encounter, if he were to be a little more fearful or believable in his acting it would be a welcome improvement on his suspect, caricature of a performance.

At the end of the day Gozu’s lasting strength lies in its amazingly surreal moments. Miike staggers the lunacy to create a swelling of hellish dysfunction that climaxes in the most shocking way, leaving the viewer dumb founded, appalled and strangely compelled to keep watching. While the film is almost an extreme Stepford Wives in the build up by the end it’s something much less comparable, switching between sheer stupidity and outright astonishment. The former moments create genuine humour amongst the carnage, which although funny, detract from the film’s serious profile- a scene involving ‘Boss’ towards the end being outright daft.

It takes a fair bit to impress or shock me in cinema but Gozu managed to leave me mildly traumatised and probably in need of therapy. Miike has clearly left Gozu with multiple open interpretations and meanings which is a relief, without the need to unearth profound truths in the surreal it leaves the viewer to enjoy, or despise, the film freely. (Or maybe I’ve completely missed the point through my ignorance of Japanese culture.) It’s hard to gauge whether Gozu is brilliant or terrible but to judge it like any other film would be to miss the point, it’s the ambition, scope and sheer audacity of Miike to produce some of the boldest cinema out there that make Gozu incredible viewing.