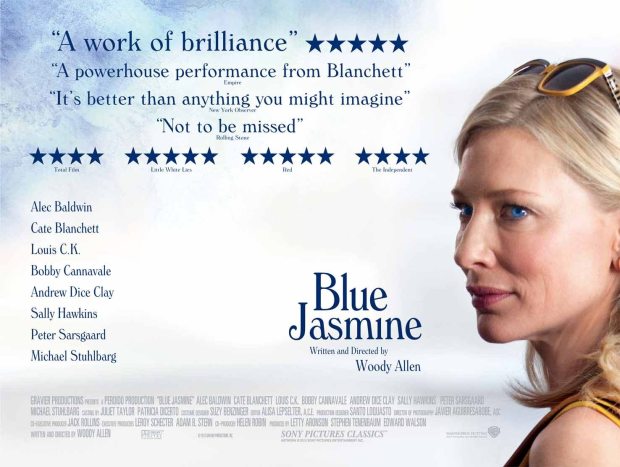 It’s difficult to know where to begin with Woody Allen, both his personal and professional life have been scrutinised to a point where it seems nothing remotely new or interesting can be written about the man and his many films. Moreover the outstanding issue with Allen’s films are that on the whole they are very very similar, not one to diverge too far from his comfort zone they all merge into a rather predictable formula. Of course all directors have their ways of working, polished styles and favoured actors; Tarantino loves his gratuitous violence coupled with engrossing conversation while Michael Bay likes making over budget films that are usually utter tripe, but Allen is just too generic of himself now to warrant anything other than a shrug of the shoulders and the acknowledgment that yes, it is another Woody Allen film.

Veteran Allen has a fevered cult following that await with drooling chops to see the latest piece of cinema to germinate from his genius, and while it will be undoubtedly wonderful for his fans it’s a less than enthralling for everyone else due to the fact it seems that Allen has made the same film yet again. Blue Jasmine may have a different location, plot and actors but it’s all far too familiar, just from the opening two minutes of Jasmine (Cate Blanchett) wittering away mid transit to anyone who will listen about her marriage and sex life you can immediately see it’s a Woody Allen film and so formulate a pretty good picture of the next 90 minutes ahead.

Allen’s focus is always on relationships, usually troubled ones inhabited by at least one awkward lonely person (more often than not small and Jewish), as well as the absurdities and idiosyncrasies of modern society with Blue Jasmine undoubtedly exploring all of these as Annie Hall, Manhattan, Midnight in Paris, etc have before.

Jasmine, her real name the less than dramatic Jeanette, has fallen on hard times, apparently bankrupt she is forced to abandon her life of luxury in New York and move in with her modest, shy and naïve adopted sister Ginger (Sally Hawkins) who lives in a cramped apartment in San Francisco with her two sons, a far cry from Park Slope and holidays in the Hamptons.

The distraught, very much unhinged Jasmine struggles to deal with the transition from champagne receptions to dentist receptionist as she is forced to start life from the bottom, where her sister has resided all along. Class clashes, awkward relationships and the unravelling of what actually happened to Jasmine and her millionaire husband (Alec Baldwin) form the crux of the film.

Materialistic, gold digging snob Jasmine contrasts with her simple sister, while Ginger herself tussles with her own love life and the realisation of being with grease monkey (Bobby Cannavale). What transpires is a black comedy drama that is darker than expected for Woody Allen, but ultimately a light hearted and tongue in cheek social commentary, the deeper issues of mental health nothing more than a vehicle for entertainment purposes.

It’s this indifferent, casual approach to the story that means it never really takes off, the audience can only feel limited empathy and emotional attachment to characters that aren’t given weight of reality on their shoulders, it’s as if there is a constant awareness that Blue Jasmine is merely a drama, detached from real sentiment.

The narrative may be underwhelming but the performances are strong throughout, Blanchett brilliantly awful in her post nervous breakdown disposition. The architect of her own downfall, it’s easy to revel in her misery as she is forced to live a normal working life with the help of the sister she neglected when she was on top of the world in New York. Blanchett herself is over the top in her unstable mental condition but it works in the dramatic bubble of Woody Allen’s creation, without such a strong lead the film would truly implode into total tedium.

The dialogue heavy world of Allen is thrust into Blue Jasmine, full of wit and observation, its vintage writing from the 77 year old director, at its peak dryly amusing but lacking the needed depth to go delve below surface level on the issues of wealth, love and class.

Blanchett is the focal point of Blue Jasmine rightfully outshining the supporting cast who all perform superbly without having the entertainment value of Jasmine. Hawkins plays her role as the ‘nice’ sister in a homely fashion, great but lacking the personality of her sibling, while the Baldwin and co are cast to a tee.

Ultimately Blue Jasmine is another Woody Allen film- those who revel in his awkward charm will lap up his latest offering whereas those who baulk at thought of the grovelling little man in Annie Hall will find little solace here. There is an air of traditional beauty in Blue Jasmine through the whimsical old time jazz and chronological ordered credits along with the fact drama is central, yet this nostalgic charm can only take a film so far.

Blue Jasmine is enjoyable but it’s nothing new, the story is rarely gripping or exciting, it’s quite simply not much of spectacle. The film could easily be a stage show, there it would thrive in a stripped down setting, but on film there isn’t enough pull or power to elevate it beyond being another Woody Allen film.