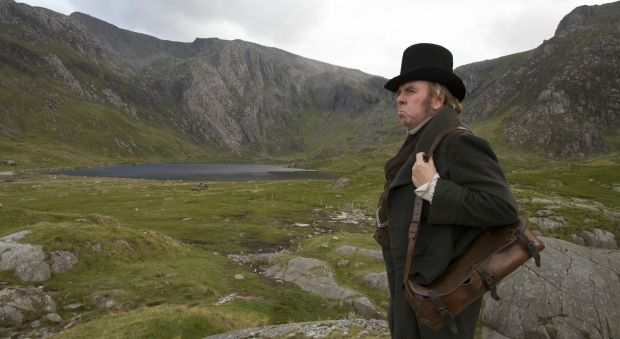 As he slumps further into his seat, a numbing chill besets a visibly drained man. His eyelids uncontrollably waver between open and closed like a ship’s bow undulating in the sea. The abject look emblazoned across his face tells a tale of defeat, hinting at the effects of a grave and strenuous ordeal. He’s had enough; surely this is the end.

Not quite. The man I’m describing isn’t some character on the big screen, but rather your humble reviewer in the final throngs of Mike Leigh’s unmercifully laborious and overdrawn film, Mr. Turner. It’s not often that I’ll yearn for a film’s end so desperately, but Mr. Turner sucked the life and enjoyment out of cinema during its 150 minute runtime.

With revered porcelain king of kitchen sink Mike Leigh writing and directing and long-time collaborator Dick Pope working as cinematographer, Mr. Turner looked like the intriguing matrimony of a beautiful but gritty period piece and thorough biopic. On the surface, a Victorian landscape painter might not sound like a particularly enthralling profession on which to center a two and half hour-long film. But this isn’t just any artist – it’s J.M.W. Turner…read the rest of the review here at MovieFail