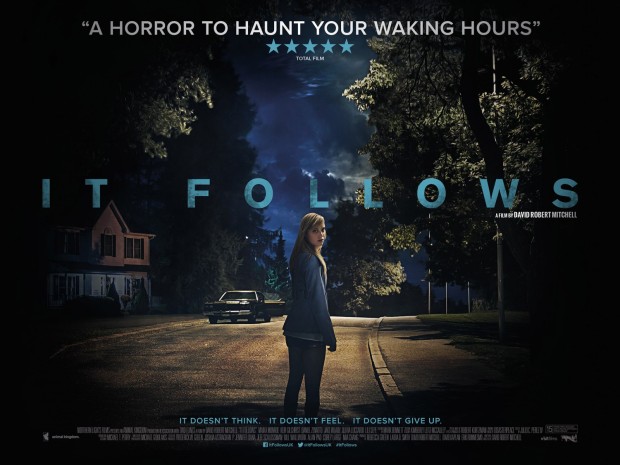 Watching It Follows, the sophomore offering from director/writer David Robert Mitchell, I was transported back to a long forgotten memory of a family holiday in New Orleans. Staying in the city’s renowned, and quite seedy, French Quarter, my mum nipped out the hotel to get some supplies from the local corner store. Worried about a woman out alone, my grandma ushered me to catch up and accompany her on the short journey. After a brief jog I spied my mother wandering ahead, yet rather than join her I decided to sneakily linger a few meters behind. Synchronising speeds, I followed closely. I could sense my mum’s anxiety that someone was following her footsteps to the beat. A few glances in shop windows along with a quickening in her step confirmed my suspicions. As we reached the shop, both striding unnaturally quickly through the bustling street, she turned to confront her stalker with a yelp, only to realise it was me and breathe a sigh of relief. “You frightened me to death!” she exclaimed much to my mischievous delight.

While my rather cruel joke proved to be an amusing anecdote, it also displayed the inherent human fear of being followed in all its cold sweat inducing glory, a sense of dread exploited unrelentingly in It Follows.

Abandoning the horror genre’s recent tedious vampiric need for exorcisms, possessions and evil spirits, It Follows is a refreshing treat. There are plenty of straight faced nods to cult favourites Nightmare on Elm Street and Halloween, most notably in the walk-never-run terror at the film’s core, but the matching of a new ghoulish threat with an exploration of teenage sexuality make this standout from the crowded mausoleum of cheap thrills.

On first glance, the film’s opening sequence could have been lifted straight from cinematic Horror 101; the all too serene American suburb setting, the sexy teenager galloping in fear like a bolted horse, and the house in view that’s uncannily similar to Michael Myer’s murderous abode. Where this Halloween homage ends and It Follows begins is in cinematographer Mike Gioulakis’ dizzying use of the 360 degree panning shot. Planted in the middle of this idyllic street the camera pans round and round as if frantically searching for an impending presence. The pulsating synth based score mirrors the girl’s, and audience’s, racing heartbeat which only adds to the thick fog of tension. In this one shot the terrorising potential of It Follows is realised.

Like suspenseful masterclass Jaws, Gioulakis and Mitchell create fear and tension without ever showing as much as a peak of the monster, instead the sound and camerawork rile the audience up into a frenzied panic. Gioulakis manipulates the film’s light eerily and beautifully to create a spotlight on the central characters leaving them with no escape from the voracious darkness. You know something horrific is coming, you just don’t know from where or when.

The ‘thing’ that stalks the film is introduced via a necessary dose of exposition early on. Stereotypical teenage horror heroine, Jay (Maika Monroe) has romantic fling with Hugh (Jake Weary), culminating in a sexual liaison in his convertible-the ultimate act of youthful freedom in Americana. Unbeknownst to Jay, through having sex with Hugh she’s taken on the terminal burden of being stalked by an evil with no name, no motive and no real identity. All we’re told, and quickly shown, is that this ‘thing’, in a variety of human forms, knows your location at all times and will briskly walk, never run, to get you. Additionally, the only way to get rid of it is to sleep with someone and passing the affliction on to them. Rather than getting muddled attempting to justify this monster’s existence, the film just tells you to go with it, and that’s the best way to enjoy It Follows.

Mitchell’s use of sex in It Follows throws up an intriguing thematic tangent. Rather than depict sex as a good, liberating act it portrays it as a burdensome evil that only results in negativity. The whole premise of passing on this stalking creature through sex is highly evocative of the AIDS epidemic and the idea it hands out an impending death sentence, manifested in this anonymous, inescapable monster. Similarly, you could argue that the film depicts sex as the act that dissolves youthful innocence in people forever. It’s good to see a horror film stimulate beyond jumps and scares, especially by elevating sex in horror beyond an exploitative genre trope. 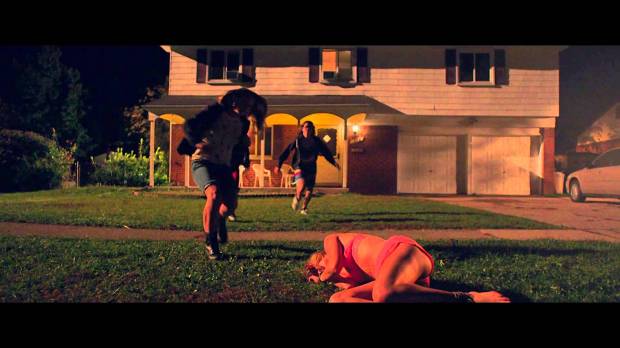 At the end of the day all we really want to know is whether It Follows is scary? The answer is sort of. Although there are some unnervingly tense chases, due to the film’s monster being a slow impending threat it’s difficult for the film to consistently churn out nail gnawing jumps. The real fear in It Follows is a subconscious one that only really reveals itself outside the cinema. It Follows will leave you taking second glances over your shoulder all the way home. The film’s unsettling horror thrives on that universal nightmare where you’re forced to outrun an unstoppable assailant, popularised by the urban myths like that of the ‘slenderman’.

As with most horror films, It Follows suffers from a desultory latter third that’s marred by disjointed editing, underwhelming action and a confused narrative. It all just gets a bit daft as Mitchell struggles to move on the brilliant initial premise. He bends the rules he concocted to manage the monster’s existence which fails to add up, leaving more questions than answers in the end.

Coupled with The Babadook, It Follows is evidence of a resurgence in the stagnant horror genre. David Robert Mitchell’s takes horror back to its most visceral 1980s roots with It Follows. The film’s unstoppable evil captures the imagination like few horror film’s effectively and uniquely can. Just like Jaws made us fear the sea, A Nightmare on Elm Street made us fear sleeping and Psycho made us fear showers, It Follows nurtures a new omnipresent anxiety. Most horror films offer you sanctuary and solace from the darkness, but with It Follows there’s no escape, and seldom is there anything more terrifying than that.