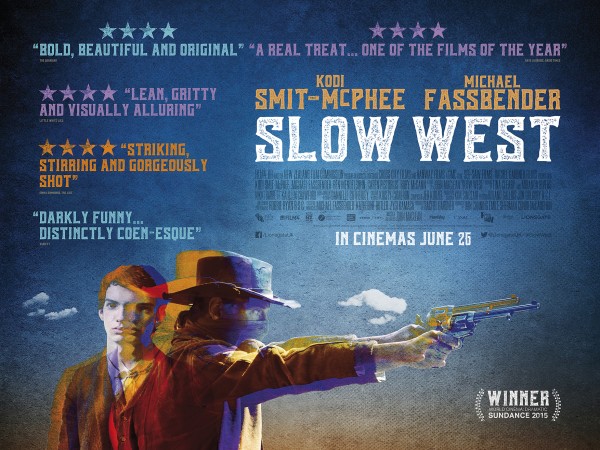 There’s a rare moment of quiet in Slow West where affable European stranger Werner, in conversation with our meek protagonist Jay (Kodi-Smit McPhee), ponders how Native American culture will be mythologised and idolised if they’re civilisation is to be eradicated. It’s a quandary that could well be extended to the entire Western canon, a genre that’s indebted to myths and legends. Director John Mclean refuses to adopt the enterprising frontier spirit led by John Wayne’s stagecoach. Instead, Mclean’s assured debut, Slow West, takes the Western back to its basics – love and death.

In one of several enticing episodic encounters, Jay runs across a band of Congolese musicians. Of their song he muses what could well be Mclean’s own Western ethos: the poetic aphorism that “Love is universal, like death”.

Slow West’s central narrative focuses on the universal longing for love. Naïve Scottish boy Jay makes the lengthy voyage from his homeland to 1870s America in search of his exiled love, Rose. In circumstances too fortunate to be anything other than a film, rugged bounty hunter Silas Selleck (Michael Fassbender) appears to offers his services, and pistol, to guide Jay west through the lawless lands.

With love out the way, the majority of the film is dedicated to death and survival. The film’s opening sequence sees Jay travel through a smouldering forest packed dense with fog, turning his idyllic horse ride through the sunny open plains into a hellish bloodbath of bullets and bodies. There are constant reminders that death lurks behind every corner. Innocent folk are driven to kill for food, animals rot in the canyons and even assassins aren’t exempt from a swift exit. It’s a brutally negative look at the West. There are no glossy dreams for prospectors to strike it rich like in McCabe and Mrs Miller or There Will Be Blood, nor is there hope for a tranquil life on the prairie pursued in the Outlaw Josey Welles and Unforgiven. There’s just living, dying and doing everything in your power to avoid the latter and a trip to boot hill.

The macabre outlook and titular placidity make the film sound like a depressing slog, yet Mclean has an eagle eye for humour and humanity. To call it Cohen-esq would be too easy and giving Mclean a disservice. The humour is charmingly tongue in cheek, boarding on slapstick at times, notably so when a wounded man sees a pot of salt, shot in the crossfire, explode on to him. It’s so obvious it’s brilliant. Silas and Jay’s encounters with the odd and eccentric people of the Wild West all have their own unique place and most importantly their own punchline. With a running time of under 90 minutes Mclean makes these exchanges count, ending the twitchy tension with a relieving laugh or a satisfactory pistol discharge.

Additionally, rather than pick up a buddy dynamic akin to 48 Hours and the lark, Silas and Jay are closer to a father/son relationship. The two bicker and challenge each other constantly. Ultimately though, the two feed off each other and for every life skill Silas implants in the naïve Jay, he returns the favour with his romantic devotion to living, not just surviving. Mclean isn’t afraid of letting his folk holster their weapons and push off the manly bravado that governs in lieu of the law. 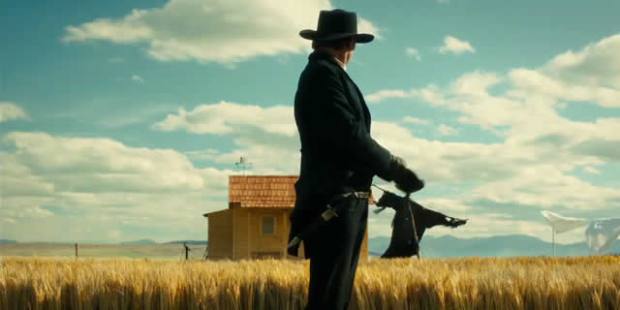 Equally welcome is Robbie Ryan’s crisply awe inspiring the cinematography. Instead of barren deserts Slow West is a picturesque treat depicting the uncultivated landscapes of America. Almost the entire film is doused in unblemished light that cascades across babbling brooks, looms over mountains and pot marks thickly green forests. While most of the film was actually filmed in New Zealand, Slow West captures a very tranquil nature that’s unquestionably American. It’s a no wonder the outlaws are slaughtering each other for a piece of it.

Not wanting to break away too hard from the Western genre, Slow West has a good ol’ fashioned shootout to fill its climax. It’s not quite as tense as Leone’s slow burning stand offs or as manically chaotic as The Wild Bunch, but it’s edited slickly enough to sit somewhere in-between. The siege at the heart of the sequence is shot from the inside looking out meaning we’re never quite sure where the danger lurks between the wiz of bullets stylishly shattering everything around. What aids this tense finale is the actual sound of each gun discharging. Each trigger pull gives off a roaring thud that sounds closer to an artillery cannon than a meagre pistol. It’s a noise that’s as exhilarating as it is satisfying.

Slow West’s weakest field are its central characters. The solid cast all fit their roles too well; Fassbender is the stoic Clint Eastwood type, Ben Mendelsohn is predictably a baddie and Kodi Smit-McPhee is as trepid and pasty as he looks. All are adequate but lack a deeper internal conflict to grow them out of their typecast parts.

Ultimately though, Slow West isn’t about specific characters and performances- it’s a film about a time and place. It’s about the great American frontier, the price of freedom and finding something beyond survival. Director John Mclean has made a conscious effort to avoid tired clichés and genre stereotypes by creating a film that realistically, cynically, and often very amusingly, depicts life out West. The Man Who Shot Liberty Valance’s famous line went “When the legend becomes fact, print the legend”. Mclean’s film is the perfect antidote under the ethos- “When the fact becomes legend, print the fact”.

← Child 44 Review
“I think that it’s the worst that film has ever been” – Is Dustin Hoffman right? →