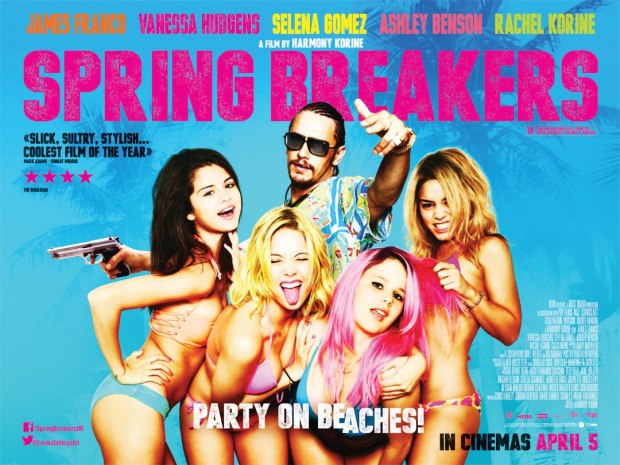 Every year thousands of college students in America embark on the ritualistic trip known as “Spring Break”, often migrating south to Florida and the Mexican city of Cancun in search of sun, sex and parties. In recent years “Spring Break” has been maligned as nothing more than an excuse for students to indulge in depraved behaviour to the excess without the watchful eyes of their college or parents to restrain them. The image of bikini clad girls soaked in bud light dancing in the middle of raucous pool parties has become the stereotypical image of “Spring Break”- a depiction that might be nearer the truth than many like to think.

For “Spring Breakers” notoriously controversial director Harmony Korine has attempted to create the most complete film of “Spring Break”, living up to every debauched stereotype that goes with the event. Not only does the film look to capture the essence of “Spring Break” but also expose the darker side, turning the usually sensible into crazed party animals, in the most ludicrously tongue-in-cheek way possible. Under Korine’s direction the film indulges in the hyper sexualised and ultra-violent throughout, the opening scene sets the tone for the rest of the film as “Spring Breakers” chug beer and douse topless women in alcohol on the beach, all in slow motion while dance music blasts out: the “Spring Break” ideals.

The film’s extremely loose narrative centres around four college girls desire to escape their mundane lives where ‘everybody’s so miserable because they see the same things every day’ and find ‘more than just spring break’ but ‘to see something different’. With their trip funded by robbing a local restaurant the girls venture to Florida to engage in some serious partying and heavy substance abuse. Predictably the girls run into trouble when their illicit activates lead them to being arrested only to be bailed out by the barely recognisable James Franco in the form of drug dealer/rapper, Alien. With Alien having ulterior motives for saving them, other than just being a nice guy, the girls “Spring Break” takes a turn for the worst.

The first irony of the movie is that the cast of college girls is made up of inoffensive Disney favourites Selena Gomez and Vanessa Hudgens, famed for roles in “Hannah Montana” and “High School Musical”, respectively. If you are expecting the young actresses to be playing their usual cute selves you are in for a rude awakening. Joined by Rachel Korine (the director’s wife) and Ashley Benson to complete the foursome the girls portray some of the most deplorable characters seen on screen in recent time. Soaking up their new found freedom in Florida they soon lose all morals revelling excess sex, drugs and violence gradually becoming more depraved as they are pushed to their limits.

The only character that has any sort of moral compass or likeability is Faith (Selena Gomez); named to reflect the fact she is the solely religious member of the group and implicitly pigeonholed as the one to show restraint due to her beliefs. In fact bar her all the other characters in the film have no redeeming features whatsoever, from Alien and his rival Archie (Rapper Gucci Mane) to the three other girls, leaving the audience willing their probable self-destruction.

Despite lacking any likeable protagonists on top of a paper thin plot it is a raucously enjoyable film mainly due to the over the top manner in which everything is portrayed. As Brit (Ashley Benson) tells us the others ‘pretend it’s a video game’, which is exactly how the film plays out, too extravagant to be real it resembles a video game in its ludicrously improbable narrative and action. The vibrant colours in neon glows of pink and blues that eerily engulf every scene are reminiscent of homage to Miami, Vice City, found in “Grand Theft Auto”; additionally the film’s climax can be likened to that of Oliver Stone’s “Scarface” in its scale and impracticality.

Korine’s innovative direction and memorable cinematography shines as he captures the essence of “Spring Break” like no other picture has due to the frank and often shockingly blunt depictions of sex, substance abuse and partying leaving little to the imagination. The soundtrack matches the atmosphere with thumping dance music and thunderous rap to supplement. Bold camera work using deliberately sexual and crass close ups put the audience amongst the action while a stand out moment is in the outsider perspective of the getaway driver circling, only privy to the robbery through the windows.

Although the film loosely follows a chronological order, scenes are often broken down into smaller moments which are interwoven to each other likewise the aftermath of many events are shown before we actually see what happened. Scene changes are accompanied by the sound of guns reloading, an ominous reminder of the violent conclusion. A traditional narrative approach would fail to capture the spirit of the film, something Korine has solved brilliantly.

Korine has excelled not in creating a realistic depiction of “Spring Break” but instead has used every excess that is archetypal of it to forge the unbelievable myth that “Spring Break” has become. Coupled with his innovative camera work and desire for nothing to be in half measures the film revels in the excess, not for the faint hearted “Spring Breakers” is a triumph in creating the ultra-cool and surreal vacation. There may be no character development, debatably unnecessary sex and violence and no real dialogue but “Spring Breakers” is a bold break from the norm enjoyable in its bold satirical approach.

One thought on “Spring Breakers Review”