Way back in 1976 a radical new band appeared upon the musical horizon, a quartet of brash, vulgar horrors with no regard for convention and niceties, unlike anything seen before. Collectively known as The Sex Pistols, these four degenerates were to change the face of music forever, heralding a new wave of music known as Punk-  a breath of fresh air in the increasingly tedious charts for some, while for many the movement was nothing short of glorified noise and an excuse for violent, stand offish behaviour.

The shocking nature of Punk was exemplified by The Sex Pistols’ raucous first appearance on national television with Bill Grundy, unfazed by the occasion the group managed to give their host the most awkward interview of his life.  Unresponsive and rude the band made the headlines with their foul language calling Grundy a “dirty bastard”, a “fucking rotter” and a “dirty fucker”, all this before the watershed!

The group’s scandalous behaviour led to the Daily Mirror running the headline “The Filth and the Fury!” an apt heading and also a reaction befitting of Irvine Welsh’s latest movie adaptation, Filth, not only for the obvious pun but also for its outrageous content that should cause a furore not dissimilar to The Pistols on Bill Grundy.

Based on Welsh’s 1998 novel, the film follows Edinburgh’s self-professed finest, Detective Sergeant Bruce Robertson (James McAvoy) on his mission to win a promotion from his fellow officers using every underhanded, dirty and immoral trick in the book, or “the games” as he labels them, to which “you just have to be the best and I usually am”. Robertson’s dastardly tactics are befitting of a man whose hobbies are alcoholism, drug addiction, prostitution, Frank Sidebottom and generally hating the rest of humanity, a despicable human being in every aspect

Robertson’s deplorable lifestyle soon starts to catch up with him as others become wise to his wicked ways, as his web of lies begins to collapse so does his mental health leading to a host of nightmarish hallucinations and erratic behaviour that send him on a surreal journey to the heart of his deep rooted fears, problems and vices.

Most people will know writer Irvine Welsh from another one of his novel’s film adaptations, heroin fuelled 90’s dance music fest Trainspotting, and it’s plain to see the similarities between the former and Filth. Welsh once again delves into the dark side of Scotland, both satirically looking at the nation’s making through Robertson’s misanthropic eyes as well as the grittier, sordid side of the country’s people. Combining irreverent comedy and painfully disturbing imagery Welsh’s novel exudes all the appropriate qualities for a compelling cinema experience to rival Trainspotting and it unquestionably lives up to its potential as one of the most powerful watches of the year.

Much of the film’s success must be attributed to Welsh’s original story but an equal measure of praise must go to director, and screenwriter, Jon S. Baird as well as protagonist James McAvoy.

Baird is far from a household name, with a role as a producer on the awful Green Street the only thing of note on his CV, yet given the chance on Filth he delivers a brutal, hilarious and all together bizarre romp through the mind of Bruce Robertson. Clearly Trainspotting has influenced his direction on Filth with horrifically surreal sequences interjecting the film’s split between comedy and troubling drama, not to mention the use of some 90s dance hits that was intrinsically so part of Trainspotting’s original appeal. While there is a clear attempt to harness Danny Boyle’s approach on Trainspotting there is enough originality in Baird’s execution to drive it away from being merely a rehash or even an homage to its predecessor.

Baird pushes the boundaries with Filth so that it hovers somewhere between being a brutally realistic and completely ridiculous, almost a sordid fantasy, an idea eluded to by the animal imagery used throughout as well as the brilliant closing credits cartoon. The fine line between reality and fiction works perfectly in tandem with Robertson’s frame of mind, just as the audience is left pondering what’s real so his he, the more excessive his self-abuse the more blurred the world becomes in his fractured mind. It’s this wonderfully confused world that Filth resides in that makes it so exciting and compelling, a world where anything is possible that keeps the audience watching with one half hoping for the worst and the other half wincing at the thought of what’s to come. 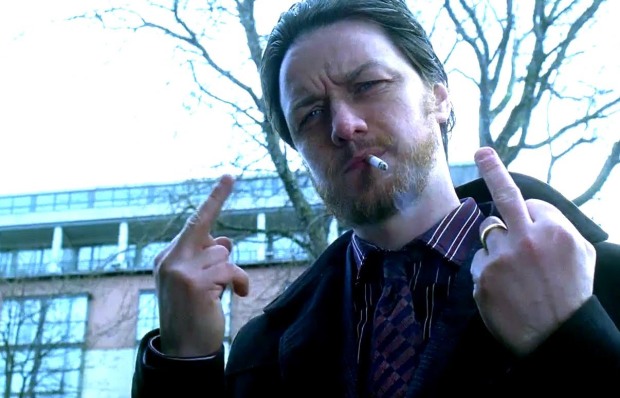 If Welsh made the story and director Baird imagined the world then it’s McAvoy who brings it all to life with one of his finest performances yet, quite possibly his best ever. Not the obvious choice to play such a repugnant character as Bruce Robertson, McAvoy transforms from the likeable lad off-screen to monster of unparalleled wickedness on screen with aplomb. McAvoy is repulsive in everything he does, from his foul mouth to his double crossing actions, yet somehow you can’t help but revel in him despite his corruption, rivalling Malcolm McDowell’s brilliant performance in A Clockwork Orange as an inexplicably loveable anti-hero.

Robertson is everything society tells us to despise but part of us envy’s his complete lack of compassion for anyone but himself, the fact he’s got the bottle to be a total bastard to everyone with no qualms and act with a total disregard for repercussions. Self-destructive and flawed like a Shakespearean lead, Robertson is a brilliant character and one of the most memorable to grace the silver screen mostly due to McAvoy’s unflinching performance that deserves critical recognition come February.

Coming in a relatively short 97 minutes Filth is a shot of adrenalin stronger than Robertson’s unrelenting stash of cocaine, hurtling at the audience with an indifference to moderation and conservatism it’s a remarkable tale that pulls no punches. It’s not as well rounded as Trainspotting but Filth is arguably more powerful, less forgiving and far wackier than its predecessor, a concoction that makes the film an absolute must watch. There will be walkouts, complaints and of course a piss poor review from the Daily Mail but as Robertson would say, bollocks to them, Filth is beautiful, hilarious, frightening and most of all refreshing.