Last week’s Golden Globes kicked off the tense award season with the much backed 12 Years a Slave picking up the gong for Best Motion Picture (Drama), the only surprise being that it was the picture’s only success on the night. Unlike the other acclaimed members of the award chasing pack that I’ve reviewed this year, 12 Years a Slave is the sole effort that hasn’t wholly disappointed and failed to live up to its critical hype. Captain Phillips was predictably conservative, American Hustle underwhelmed despite its all-star cast and Gravity had Sandra Bullock woofing like a dog, but Steve McQueen’s epic tale of hardship and slavery is a near faultless film deserving of the insurmountable  heap of praise lauded upon is brazen shoulders. Without unnecessary gratuity, glamorised heroism or naivety on the sensitive topic, 12 Years a Slave is an epic of the modern filmmaking era.

The inspiration for the film comes from the correspondingly named memoirs of Solomon Northup published in 1853. His tale is a remarkable one, as an African American freeman Northup (Chiwetel Ejiofor) found success as a talented musician in New York State, where he lived with his wife and two children, before being kidnapped and expedited to the Southern States in order to be sold into slavery. Far removed from his home comforts, Northup was forced to renounce his talents, name and past life in order to survive the grim realities of plantation life under a variety of mostly cruel and barbaric slave drivers. After enduring his new found, bleak and ill-fitting existence for 12 years, a chance encounter opened the possibility for, and eventual release of Northup resulting in an unlikely reunion with his family.

With the film’s narrative so heart-breaking and traumatic it would be easy for director McQueen to simply allow the story to provide the emotion, but he refuses to rest on his laurels by infusing almost every scene with emotional depth and compelling believability. While Northup’s tale is an extraordinary basis, it is individual scenes, remarkable moments, that standout as perfectly orchestrated cinematic brilliance. McQueen’s direction is visionary, seldom is a shot or scene wasted or flawed. The brutal reality of life as a slave is unflinchingly played out, cruel and despicable acts are briskly moved through Ejiofor’s periphery vision in tandem with his tale. We may have seen families torn away from each other and the imposing threat of lynching before, but there’s a real subtle, almost nonchalant, horror to how they are accepted as the norm in the 1800s leaving the audience and Northup in equal levels of shock. When the drama unfolds closer to home with Northup it’s similarly affecting, his contradictions to conform as a slave and escape his conscripted lifestyle are resolutely played out to avoid clichés and contrived hope. Flashes of natural beauty interject the unwaveringly stark outlook, a timely reminder that freedom lies on the unreachable horizon; no scene is reduced to inconsequentiality. 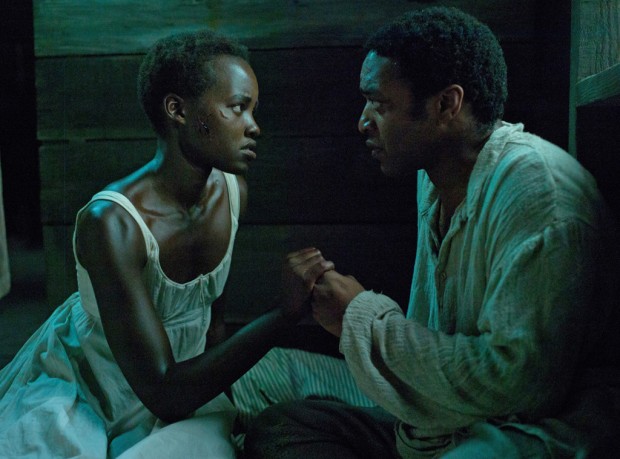 12 Years a Slave tackles the issue of slavery without lapsing into masochistic or gratuitous fetish, depictions of violence aren’t forced upon the film, instead they naturally blossom out of the hateful scorn of deplorable men; Edwin Epps (Michael Fassbender), Theophilus Freeman (Paul Giamatti) and John Tibeats (Paul Dano). Fassbender produces another brilliant performance in collaboration with McQueen, following the harrowing Hunger and Shame, as the manic, religious fevered plantation owner Epps. Fassbender is frighteningly unhinged, his on screen presence enough to prompt retching tension in anticipation of his unpredictable and irrational behaviour. The aforementioned actors along with household names Benedict Cumberbatch and Brad Pitt further the epic qualities of the film rather than make up numbers for star power, each another intriguing footnote in Northup’s journey.

Special praise most be reserved for lead Chiwetel Ejiofor, just like the film he’s consummately poised not to overplay his role. Rather than being an infallible hero Northup is elegiac, caught between emotions and sacrifices about his situation, the novelty of a literate, talented slave plagues and isolates him from his blissfully ignorant peers. Ejiofor portrays unconventional valour though contrite feelings about his circumstance, but also a fearfully unwavering and simmering urge to see freedom again, producing natural empathy.

Newcomer Lupita Nyong’o plays fellow slave, and Epps’ infatuation, Patsey; she too embodies the stark nature of survival on the plantation superbly. It’s the giant performances form herself and Ejiofor that anchor the film’s latter time, providing a depth and impetus that combats any lulls or tedium.

The last twelve months has been littered with disappointments and underwhelming spectacles, that was until 12 Years a Slave almost literally lashed its way through the box office mediocrity. Steve McQueen’s previous film, Shame, was far from easy viewing with its graphic sex and violence moored in alienation and 12 Years a Slave carries off similarly uncomfortable themes. While the former lacked consistency and emotional depth the latter tale of Solomon Northup combines a raw edge with credible, human emotion in abundance. The technical brilliance and meticulous creation of each scene is supplemented by powerful performances across the board with Chiwetel Ejiofor drawing the plaudits for his depiction Northup’s alien situation and strife coming to terms with it. The Oscar nominations are announced today, fully expect 12 Years a Slave to deservedly sweep the categories, films of this simplistic grandeur on such a taboo topic are a golden rarity.

One thought on “12 Years A Slave Review”