Seldom is there anything more despised in the civilised world than a child killer. Merely the thought of someone consciously doing harm to a child is enough to send an individual into a despondent spiral with humanity, the actual murder of a child is almost too horrifying to fathom. The unfaltering condemnation, and obsession, the UK holds with 1960s child killers Myra Hindley and Ian Brady is a testament to the high regard that society holds the sanctuary of an innocent child’s life, as well as the apoplectic scorn we hold on those who threaten it.

But what if there was an excuse for the inexcusable crime of killing a child? What if these undoubtedly wicked monsters weren’t actually culpable for their actions? What if our idea of justice, and perception of what constitutes evil, was completely wrong? These polarising questions and notions are explored in a 1931 bastion of cinematic brilliance, an underappreciated old timer facing a current UK re-release.

The classic I speak of is Fritz Lang’s M. After his dystopian sci-fi masterpiece Metropolis, M is probably the German director’s most well regarded and known work, a masterfully enthralling thriller that expands beyond both noir and expressionist contemporaries.

M introduced the world to bug eyed Hollywood icon Peter Lorre who plays sympathetic child killer Hans Beckert. With a backdrop of German society crumbling under frenzied paranoia and suspicion, Lorre stalks the streets rallying not just the police into hunting him down, but also the underworld of gangsters targeted by the law’s enquiries. As these polar opposites of the legal spectrum commence an all-out manhunt it becomes apparent that Beckert’s days are numbered, but who will get to him first and what will they do to him, a questioning of our whole notion of justice.

Lang’s film delves into the nature of loaded issues without ever making them a chore to stomach or the narrative a droll saga. Instead, deeply dark topics like the nature of justice and evil are presented compellingly through Lang’s distinctive direction, almost a documentary in its retelling of facts, M presents the manhunt objectively as it jumps between concerned stakeholders; the grieving mothers, the riled criminals, the strained police force, the oblivious killer and the general population, whose normal lives have been left in abeyance.

Unlike fully fledged German expressionist films, such as the very surreal Cabinet of Dr. Caligari, Lang reigns in the outlandish sets, painted on shadows and dream like narratives in order to make a film that could well exist in our reality, a goal that Lang attested to when he stated his desire to make “a film based on factual reports with a more substantial responsibility than the artistic reproduction of events… in this way ultimately having a preventive effect”. While Lang’s aim is a film stooped in realism, he still utilises expressionist devices effectively meaning M functions as a forerunner to the hard boiled, shadowy mystery of 1940s film noir.

One of German expressionism’s defining concepts is that of the doppelgänger, the schizophrenic nature of life and humanity, and M revels in the notion. Killer Beckert’s first appearance is eased into the film, finally revealed after an innocuous start; he’s a meek, childish man completely out of tune with our preconceptions about a child murderer. Throughout the film Lang uses mirrors and windows to project Beckert’s alter ego, the tremulous and farcical man looking in is an entirely different beast to the pernicious murderer staring back, never more so than when he famously spies the chalked ‘M’ mark of condemnation on his back in the shop window, the literal manifestation of his evil alter ego.

Lorre’s alter ego in the mirror

Just as Beckert exists as two persona so does the rest of M’s contingents. There’s irony as the police and criminals blur into an indistinguishable one when discussing how to catch the killer, and again later when the criminals impersonate the judicial system in their own kangaroo court. Just as the law has two sides to its coin so does the general population; mothers grieve over the death of their children before championing the execution of the culprit, while the tumultuous mob of masses turn on one another in the hostile climate, the disorder accentuated by chaotic cacophony of sounds from the bustling urban sprawl.

M’s most engrossing sequence comes in a superb climax to the manhunt. The scornful and judgemental gaze from the less than wholesome kangaroo court of crooks pushes the captured Beckert to boiling point, he retorts his accusers with a riveting monologue that sees Lorre at his most immediate and passionate, announcing him as a star on the silver screen.

Like a deranged circus clown, illuminated under the court’s spotlight, Lorre, the reluctant performer of his own nightmares, vehemently defends his actions as the consequence of a primitive obstinacy, a repressed urge resulting from a biological hardwiring unsuitable for modern society. The surreal nature of this appeal is confounded by the unnerving sight of a blind vagrant lingering behind Beckert holding the damning evidence in the form of a guilt filled balloon. 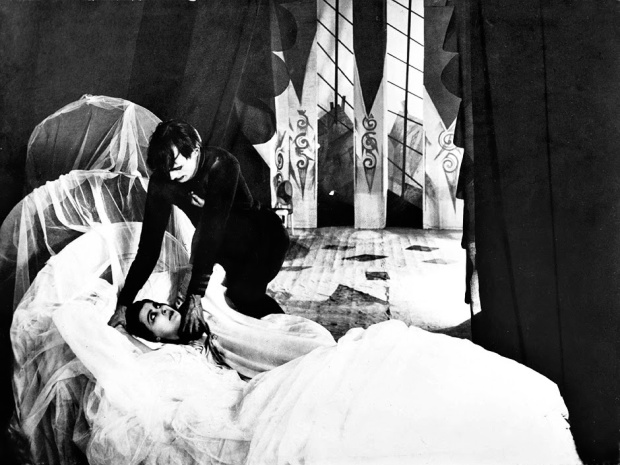 A scene from the surreal film ‘The Cabinet of Dr Caligari’

Lorre is impassioned and earnest in his defence. The camera sets firmly on his portly figure leading to an appeal, not just for his captors, but straight to the audience themselves, Lang asking the big questions of damnation to us, making the viewer an active participant in the trial. During this monologue Lorre states “It’s me, pursuing myself” once again drawing on the idea of a split personality, an evil doppelgänger intent on suffocating the docile, childlike Beckert that we see throughout. To see a murderous impulse as a natural disease, as Lang does, is to be uncharacteristically understanding in the face of what many consider to be the worst mortal sin, an idea that’s dangerously divisive now, let alone in 1931.

This bold excuse for murder can be seen in the recent, and brilliant, Lars Von Trier double biller Nymphomaniac where a paedophile is exposed and shamed for his irrepressible feelings. As he weeps over the constant struggle to restrain this dark urge, it’s impossible not to link it back to Lorre; sunken, defeated and alone on the dilapidated distillery floor.

The court room drama is one of the most compelling watches in cinematic history, Lang displays both sides of the argument as objectively as he portrays the prior manhunt, meaning the audience is given the gruelling task of deciding this man’s fate, a far from simple task as just when you feel overwhelming sympathy for Beckert, M thrusts a counterplea in the form of the mother of a murdered child. Like 12 Angry Men, the stakes, hypocrisies and tensions of common and universal law are placed under the microscope in court.

Lang himself offered the film as a realist replication true to life events, ultimately a prescient warning to look after your children, but there’s so much more to extrapolate from M: the point of law, both common and universal, what right we have to judge other’s actions, the difference, or lack of, between the police and gangsters, as well as whether evil is an excusable disease rather than a chosen action. This wonderfully realised classic piece of crossover noir and expressionism is mastered through Lang’s direction and Lorre’s magnificently sympathetic performance, the duo crafting a truly timeless masterpiece well worth a watch when it comes by your nearest cinema.

Venues Showing M in the UK

N.B. You can also watch M on Youtube here