With the Oscars on the horizon (Sunday), I thought I’d share my obligatory ‘best of the year’ list, albeit fashionably late in late February. The tricky element of compiling this list was in the fact that many films exist in a dubious limbo of release date. Officially Birdman is a 2014 release, however it didn’t make it over to the UK until 2015 which means it is indeed eligible for my consideration. Similarly, The Hateful Eight and The Revenant are technically 2015 releases, however I didn’t see them till this year so sadly they’re out of the running. If I saw it in 2015 it’s eligible for the list, got it? Excellent, let’s commence battle with number 10…

Starting off with an obscure number is Alex Ross Perry’s tale of a neurotic, pessimistic and arrogant novelist Jason Schwartzman and his darkly funny existential crisis. Listen Up Phillip perfectly pens the human notion of mortality under the guise of Phillip’s turmoil over how he’ll be remembered, or, at this nascent point in his career, whether he even will be. The dryly witty and acerbic script is matched by some excellent performances, including Jonathan Pryce as Phillip’s cantankerous mentor. The pulp style narration coupled with retro aesthetics only add to the rich tale panning out before us. Anyone who has ever had artistic or creative ambitions will be hard pushed not to fall for Phillip’s self-induced, or self-important, malaise.

What I said: “It’s the cinematic equivalent of that smarmy, sarcastic, cynical mate we all have- a bit of a dick, but you can’t help but admire his barbed tongue.”

Kingsman may well have made this list off the back of one utterly mental scene. It involves Colin Firth, a classically debonair British spy, mutilating and pulverising a whole congregation of enemies in one dizzying and exhausting take. In an age where giant robots levelling entire cities and cowboys literally being ripped in two by their genitals isn’t particularly shocking, it’s an impressive feat to genuinely amaze like Kingsman does. Of course, there’s much more to Kingsman than a psychotic Colin Firth. It’s a right British romp that matches the world of Snatch and Lock Stock with James Bond. The humour can lean on the puerile at times, but Kingsman is a refreshing franchise in an otherwise bland world of reissues and reboots.

What I said: “We’ll always have 007 leading the line for serious cinematic espionage, but with Eggsy and the Kingsman, we’ve got a rambunctious alternative well worth taking a joy ride with.”

The Oscars aren’t one for shocks, least of all this year, but one nomination certainly raised a few eyebrows; Charlotte Rampling for Best Actress. Yet, for those who’ve seen the brutal brilliance of 45 Years will have no qualms with Rampling’s well-earned nomination. The real travesty is that her co-star David Courtenay wasn’t afforded similar recognition. Haigh’s film is a harrowing look at how an elderly couple’s world is turned upside down by the almost literal appearance of a ghost from their past. While a deeply bleak and desperate film, the authenticity and humanity injected into the central relationship by Rampling and Courtenay is astounding. In terms of pure drama, you’ll be hard pushed to find much better than 45 Years.

What they said (Mark Kermode, The Guardian): “Superbly nuanced performances from Charlotte Rampling and Tom Courtenay and exquisite direction by Andrew Haigh, who also co-wrote the film, turn an apparently everyday story of a marriage in quiet crisis into something rather extraordinary.”

Jazz drumming isn’t a field that I can normally get very excited about, that was until I survived Whiplash. I say survive, as the film is so unrelenting and intense in its execution the faint hearted amongst us wouldn’t stand a chance lasting its 106 minutes. The film itself is an editing masterclass; music and picture become a holy union that unfurls in an explosive burst of frenetic jazz. It makes heavy metal look like nursery rhymes. J.K. Simmons is inspired, winning an Oscar for his performance, as jazz zealot Terence Fletcher reigning terror and torment on his pupils. Simmons clashes with star pupil Miles Teller are tense battles overflowing with blood, sweat and tears. The whole film is tight as a snare drum and flows with a melodic dose of adrenaline heavy enough to convert even the most ardent Jazz hater.

What they said (Robbie Collins, The Telegraph): “This dazzling, exhilarating drama from the young American director Damien Chazelle isn’t a story about the roles played by misery and humiliation in forging a great artist. It’s a story about what happens when people believe that’s how great artists must be forged: both the mentors raining down pressure and the pupils whose souls are on the anvil.”

It may not have got much love from the Oscars, but it gets plenty of praise from me and my teenage, hip-hop obsessed former self. For hip-hop purists and aficionados, Straight Outta Compton faithfully recreates the hype, danger and excitement that the world’s most dangerous group N.W.A. conjured in the late 1980s. Dr Dre, Eazy E, and, most impressively by his son, Ice Cube are brought to the fore as each of their egos vie for top billing during the birth of Gangsta Rap. Cameo nods to The D.O.C., Tupac, Suge Knight and Snoop Dogg only add to the appeal and nostalgic value. It’s not a perfect film, but it’s a raucously enjoyable watch about a pivotal culture moment.

What I said: “Damn, that shit was dope!”

Carol is a visually sumptuous piece of filmmaking. Todd Haynes channels Douglas Sirk’s ‘50s suburbia satire of All That Heaven Allows and David Lean’s romantic epic A Brief Encounter to craft a lush and alluring tale of forbidden love between two women. Shot with a grainy coarseness the film juts between a bleak realism and comforting toy town style warmth. In this meticulously arranged world lovers Cate Blanchett and Rooney Mara delicately swoon around each other in a fragile ballet of emotions. The actual love story doesn’t quite convince in its staged portrayal, but the beauty of 1950s New York is just too overbearing and engaging to resist.

What I said: “Sometimes majestic and beautiful, other times stoically cold, Haynes’ film is as delicate and complex as one of the many snowflakes that drift across the screen.”

Everyone spent 2015 raving about Asif Kapadia’s Amy Winehouse documentary, unimaginatively named Amy. In fact everything about the film was unimaginative. Kapadia’s film played out predictably with little innovation or inventiveness on show. Amy’s success and appeal was built purely on Winehouse’s tumultuous (im)personal life and her tragic ending. Premature death is the making of an artist, but what about cheating death long past your prime? That’s what the The Ecstasy of Wilko Johnson is all about. Wilko is the manic ex-guitarist for 70s Pub Rockers Dr Feelgood. At the ripe old age of 64 Wilko was diagnosed with terminal cancer, Temple’s documentary follows a man assessing his life and coming to terms with his fate. Poignant, hilarious and cleverly patched together through both Wilko’s literate eye and Temple’s cinematic lens, it’s the best documentary I’ve seen in a long long time. It truly is a Feelgood film with a killer twist.

What I said: “On top of the fact Wilko’s unique tale is the fact he’s such an enchanting, complex and humorous character. At odds with his bluesy three chord guitar playing Wilko’s a fountain of literature. At one moment he’s quoting Shakespeare and Chaucer, the next he’s off reciting Milton’s Paradise Lost word for word, not before a brief detour into ancient Icelandic poetry.” 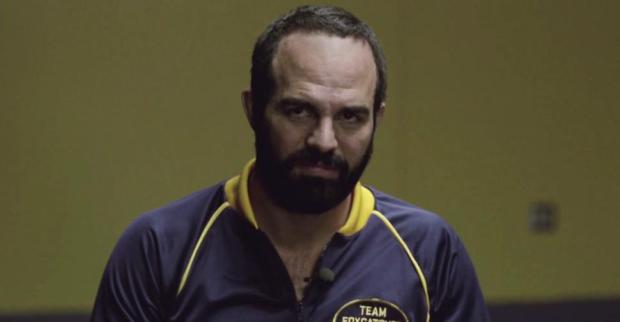 Foxcatcher seemed to be hyped up for award winning stardom before the trailer was even glimpsed. Yet oddly when it did eventually hit our screens nobody took much notice. Perhaps that was down to the alienating and harrowing tone director Miller opted for on his tale of Greek wrestling and Greek tragedy. Olympic gold medallists Dave and Mark Shultz, Mark Ruffalo and Channing Tatum respectively, are taken in by mysterious philanthropist and wrestling enthusiast John E. du Pont (Steve Carell) under the promise of more Olympic success. Of course, Du Pont’s motives are far from as simple as goodwill. The tripartite at the film’s core are superb, each expertly possessing a battling persona – none more so than the creepy, pathetic and absorbing Carell. Shot in barren long takes oozing in suspense, Foxcatcher epitomises the struggle of man through the most muscular of sports; wrestling. It’s not a fast paced action fest like The Fighter or Warrior, instead Miller builds a cerebral beast that slowly builds to an explosive blast of shocking horror.

What I said:  “It takes a while to get into the film, but once you’re in it’s a mesmerising experience, the bizarre triangle of characters becomes a hypnotic tragedy of seething tensions.”

It’s not often these days something truly unique appears at the cinema, Anomalisa is one such a rare treat. Out next month in the UK, I implore you to go marvel at this wonderful technical and dramatic achievement. The film is created through the pain staking medium of stop motion puppets. Rather than create a fantastical setting, these puppets perfectly shadow the real world to the most mundane detail, including a terrifyingly accurate replication of a hotel room. Anomalisa follows depressive, and increasingly self-destructive, customer service guru Michael Stone (David Thewlis) on an overnight business trip to Cincinnati. Co-director Kaufman’s script is brilliantly complex in the way it builds its characters up through the tiniest of details. Similarly, Duke Johnson’s puppetry is masterful as he manages to present an unsettling hyper reality representative of Stone’s crumbling mental state. Looking beyond the startling aesthetics, Anomalisa is simply engaging from start to finish – and that’s all good cinema really needs to be.

What I said: “Anomalisa’s writing, acting (well, voice acting) and unique puppetry make it something special no matter how it crosses your path. This sort of bold filmmaking is what cinema is all about, so I implore you to go see Anomalisa. It is, indeed, an anomaly.”

1. Birdman (Or the Unexpected Virtue of Ignorance) (Dir.Alejandro González Iñárritu)

There’s not really much more, or new, I can say about Birdman. It won best film at the Academy Awards last year and rightfully so in my opinion. Once you look beyond the spectacular smoke and mirrors of the single take aesthetic, Birdman is a wonderfully sharp, comic and poignant film. Keaton excels in a role that was tailor made for him, while his stellar co-stars all inject their own wit and personality into proceedings. Ultimately, what Birdman represents is the power and triumph of cinema. It’s a film completely absorbed and entwined with the very notion of filmmaking and that’s what makes it such a terrific mediation on, and ambassador for the joyous medium.

What I said: “Keaton’s meta-existential crisis transcends the needs of an ageing film star. Riggan’s plight is a timeless one, boiling down to the universal human need to leave a memorable mark on the world. What Riggan hopes for, Keaton has actually gone and achieved with Birdman”

One thought on “Jonny’s Favourite Films of 2015”