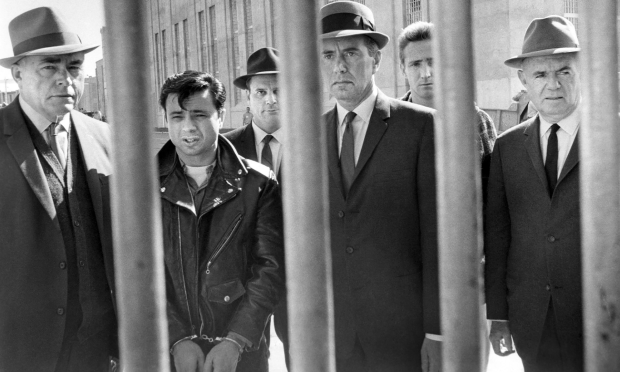 Every Friday I’m going to be highlighting and analysing some of cinema’s greatest scenes, or sequences depending on your definition. Some will be familiar, etched indelibly into the iconography of cinema, while others will be obscurer moments worthy of wider circulation and attention. For this week’s entry it’s the cinematic adaptation of Truman Capote’s classic crime chronicle In Cold Blood…

The Background: In 1959, petty crooks Perry Smith (Robert Blake) and “Dick” Hickock (Scott Wilson) concoct a plan to invade the home of the Clutter family, on the pretence that Mr. Clutter keeps a large supply of cash in a safe. After botching the job, in the most brutal circumstances, the duo are eventually apprehended, arrested and sentenced to death.

The Scene: After watching his partner swing from the gallows, Perry Smith anxiously awaits his execution while recounting his childhood to the prison Chaplin.

What Makes it Great?
This week’s installment is short and not so sweet. In Cold Blood is a meticulous, journalistic, retelling of a crime – from its nascent planning all the way to its perpetrators’ demise – that ends up a much greater meditation on the American conscience. It’s a film of desolate beauty as the camera follows the crooks across the barren Midwest plains, but the most striking moment of wonder appears on the face Perry Smith. As he speaks frankly, the heavy rain outside reflects on his face mimicking tears.

Technically, the way the shadows of rain drip past his left eye is spectacularly precise to replicate tears. Amazing, what appears a carefully crafted shot is merely a fortuitous accident. Cinematographer Conrad Hall admitted that the famous shot wasn’t his genius, but a brilliant moment of chance:

“The outside light was creating the penetration, and we used a wind machine to create some movement in the rain. But the machine blew a mist on the windowpanes, and after a certain point the mist became so heavy that it started to trail down. While I was lighting the scene, I noticed that the light from outside was shining through the water sliding down the window pane and projecting a pattern resembling tears on the face of Robert Blake’s stand-in….people think you’re a genius for planning something like that, when in reality you were just smart enough to notice it and exploit it.” 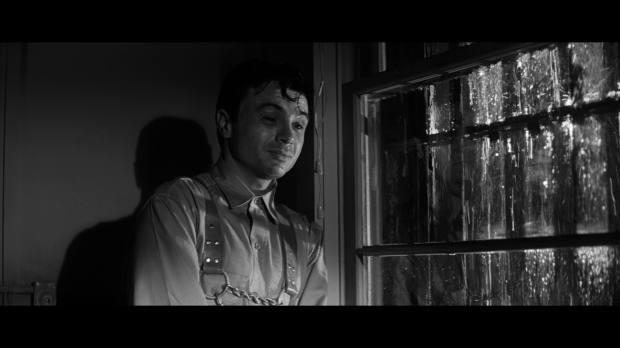 As well as being visually striking these false tears perfectly fit Smith’s frank, unemotional, tale. He speaks, with a detached honesty, about his father’s attempt to kill him after the failure of a business enterprise. He ends the tale by saying how he’ll miss his old man when he’s gone, but he still hates him vehemently. Smith remains emotionally confused and shows an inability to express feeling during this very personal monologue. The phantom tears that shadow across his face become the ghostly reflection of his buried emotions. It’s almost as if his inner workings are being projected on to his exterior self.

The grave nature of Smith’s story and his situation, coupled with lashing rain, create a darkly bleak and sad atmosphere. The emergence of these slopes of rainy tears amongst the glow of light perfectly fits the strange cauldron of emotion and atmosphere on show. It’s these small, apparently inconsequential, touches that bring the scene together and elevate all the elements into a masterstroke of filmmaking. Smith’s story goes from a nostalgic rumination to a heart-breaking portrayal of the inescapability of the past and paradoxical nature of humanity. It just goes to show that brilliant scenes are as reliant on a healthy slice of fortune as much as they are a Kubrick-esq genius obsessively micromanaging every speck of dust. There’s simply no substitute for a flutter of lady luck’s magic.