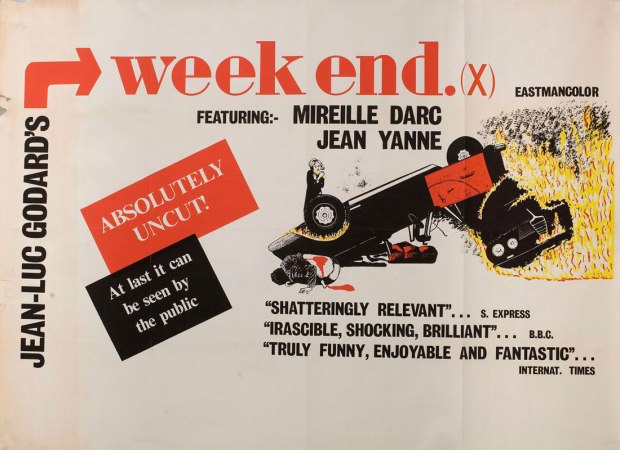 Every Friday I’m going to be highlighting and analysing some of cinema’s greatest scenes, or sequences depending on your definition. Some will be familiar, etched indelibly into the iconography of cinema, while others will be obscurer moments worthy of wider circulation and attention. For this week’s entry it’s Jean-Luc Godard’s infuriating, comical and bizarre satire Weekend…

The Background: The bourgeois couple Roland (Jean Yanne) and Corinne (Mireille Darc), determined to collect an inheritance from her dying father, travel across the French countryside while civilization crashes and burns around them. If only Godard’s films were as simple as they sounded…

The Scene: The couple’s journey has only just started, but already they’re struggling to make progress as they become embroiled in an epic traffic jam.

What Makes it Great?
I’ll start out by saying I absolutely hate this film. It’s impressive for a director to be quite as divisive as Godard. I love Breathless, Pierrot le Fou and Alphaville, but the likes of La Chinoise, Goodbye to Language and Weekend are amongst the most excruciatingly impossible watches. They’re over politicised, pretentious and perversely crafted to make the viewing experience as gruelling as conceivable. Weekend is far from what could be described as an enjoyable watch, what else would you expect from a film where the final title card announces it’s the “end of cinema”, but that’s not to say that it’s devoid of genius.

The film’s most famous moment comes courtesy of a monumental tracking shot through a traffic jam that covers around ¾ of a mile and lasts over seven minutes. We follow the leading couple as they attempt to navigate this surreal car bound cross-section of French society. As the camera pans through the blockage of automobiles we see children playing by a car wreck, a zoo’s worth of animals trapped in static lorries, a couple playing a board game by their flipped car, a man wrestling with the sails on his boat, all while a constant barrage of abuse and aggression taunt Roland and Corrine. Godard once cryptically quipped “politics is a travelling shot” which goes some way to understanding the traffic jam sequence. 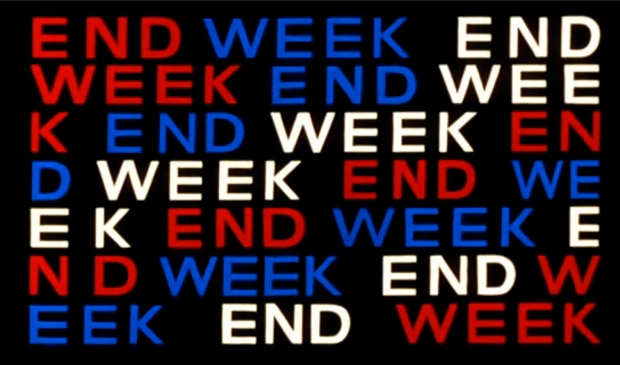 Our protagonists appear to embody the relentless progress of capitalism as well as the ideology’s apparent indifference to death and destruction. They plough through the pileup without giving as much as a second glance to the stranded road users. There is a general indifference by all to the chaos lining the roadside, notably when a troupe of children meanders past the strewn crash victims, but Roland and Corrine’s hurried drive typifies the race to the top of a consumerist society. Capitalism thrives through competition, jealously and progress hence why there’s such resentment aimed at Roland and Corrine as they plough ahead of the pack. It’s interesting that at the end of the traffic jam Roland and Corrine veer off the main road onto a dirt track. By turning off the main route they reject capitalism as the focal path of progress, embodying Godard’s own contempt for the time’s prevailing ideology.

By the late 1960’s Godard was becoming increasingly experimental with the cinematic form. Weekend shows a notable shift away from traditional narrative process, instead we’re made brutally aware of the instructive possibility of film over entertainment. The traffic jam sequence, like the film as a whole, contrives to break the fourth wall. Rather than utilising his famed jump cuts, Godard flashes two title cards to break our involvement with the narrative. The first card, the film’s title Weekend, quite literally reminds us that we’re watching a film, while the second ‘13h40’ emphasises the length of this protracted traffic jam. The tracking shot in itself is so audacious and over exposed that it draws attention to itself by simply being. These jarring excursions back to reality remind us, the audience, that Godard’s political message and content isn’t isolated to film but must be extended to reality.

The whole sequence sounds very grave and serious when itemised in such a way, but there’s a humour to be found in Godard’s absurd tongue in cheek vision. A man of many aphorisms, Godard quipped “Sometime reality is too complex. Stories give it form.” With the late 1960’s, especially in France, an increasingly volatile period, Godard’s Weekend can be seen as the perfect deconstruction of a world stuck in its own almighty traffic jam.