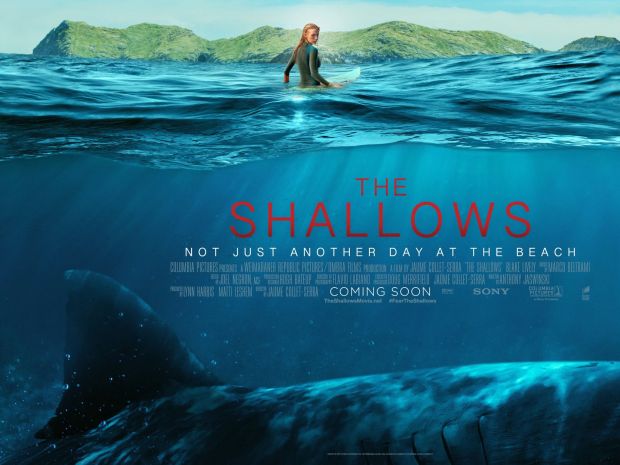 My favourite comment of film criticism this year came courtesy of Danny Leigh on the BBC’s Film 2016 review show. While discussing recent Austrian horror Goodnight Mommy, Leigh brilliantly described the ultra-modern-Ikea-stuffed-geometric home setting as “the cabin in the woods for the Waitrose generation”. In a similar ilk to Leigh’s witty remark, you could label shark infested thriller The Shallows as “Jaws for the Gap Yah generation”. As bikini clad protagonist Nancy Adams (Blake Lively) soon finds out, there’s nothing worse than travelling to an exotic beach in Mexico to find yourself, only to end up finding a bleeding malicious great white shark instead.

Like a sun kissed Revenant, The Shallows operates as a tense, edge of your fin, survival thriller. However, unlike the The Revenant huffing, puffing and spluttering like a portentous cruise liner, The Shallows streams through the waves with the rush of a speedboat joyride. Director Jaume Collet-Serra made his name in trashy B-Movies style pleasures, including cult crapper Goal II: Living the Dream and a host of banal Liam Neeson romps, and with The Shallows he’s made something beautifully instant and satisfying.

On the surface The Shallows is a wholly ludicrous affair. Essentially it’s a film about a beach blonde bombshell fighting an abnormally aggressive and gigantic shark. It almost makes Roy Scheider duelling Bruce the mechanical shark in Jaws seem like a plausible match up. However, below the surface, The Shallows is refreshingly restrained piece of cinema. Most surprising is the fact our heroine is thrashed out to resemble a real human being with hopes, fears and dreams. When you consider Collet-Serra once cast Paris Hilton in House of Wax, you’d be forgiven for thinking that Lively’s presence was simply as a piece of marketing eye candy. Instead we’re afforded a superb performance from Lively

Perhaps the most accurate comparative piece for The Shallows is the Tom Hank’s inspired Castaway. For the most part Lively isn’t swimming for her life, instead she’s marooned on a small rock that despite being tantalising close to shore, may as well be in the middle of the Pacific Ocean. It’s in these extended, reflective moments of calm that we take to Lively’s wholly plausible character. She befriends a wounded bird on her rock, and like Hank’s football shaped mate Wilson, it becomes a blank canvas to project her own thoughts on.

Stalked and stranded she muses on her own struggles in life – namely an uncertain future and the recent loss of her mother. The shark soon becomes a slightly heavy handed metaphor for the wider reaching hurdles she’s struggling to overcome. The symbolism drifts into trite waters, but the point is that Lively’s Nancy is a character we understand and empathise with despite the absurd scenario.

It seems totally at odds with the film’s premise, and the director’s track record, but The Shallows’ buzzword is plausibility. It’s not just Nancy, but the entire film works on a basis of pushing reality without ever drifting into the murky waters of full blown daftness. In an age when we’re continually forced to relish absurd superheroes and suspend disbelief at all times, it’s a relief to find a film content with imaginative solutions. Bar a duff bit of CGI involving jellyfish, the narrative logically progresses within a fortuitous realm of possibility. Lively doesn’t grow gills and swim away, nor does she assemble a rock launcher out of sea debris. Instead she relies on her experience and cunning, her background as a medical student coming in extremely handy, to survive. 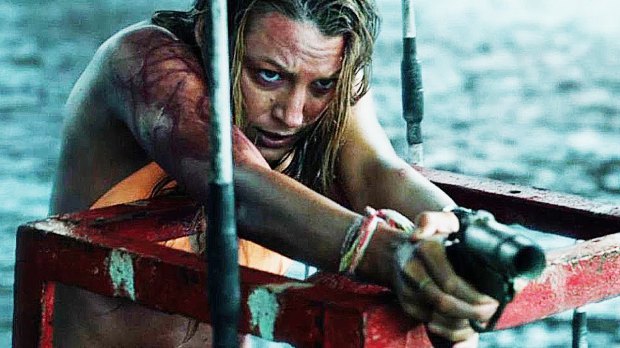 Clocking in at mere 86 minutes the film is timed to perfection. Despite the extended focus on Nancy and the credible nature of proceedings, there’s plenty of arse clenching tension to be found. The shark’s appearances are relatively sparse meaning when he does expose his big gnashers it’s a memorable, striking attack. Like all good horrors The Shallows plays on the fear of what isn’t there. We’re constantly disorientated by what lurks beneath the surface of the water. Even when we can’t see the shark we can feel its presence patrolling the depths. When Nancy does, quite literally, venture out her depth, there’s an ominous tension frothing in the tide.

It may have taken 30 years but the fear factor is back in the ocean. The Shallows’ trouble in paradise will make you question even thinking of dipping your toe back in the black, murky depths. In the words of Jaws 2; “Just when you thought it was safe to go back in the water…”

One thought on “The Shallows Review”